The Rebels’ much awaited return was met with a harsh welcome by the hands of the still undefeated defending champions, The Wolves. Speaking to Rebels’ Running Back, Jec Castolome, the loss did not destroy the team’s spirit, but instead gave the team more motivation to do better in their next game against the Cavemen. “Karamihan ng players natin first game nila so nangangapa pa. Pero, nangakong dadalhin nila ang A-game nila next game.” according to Jec. (This was a first game for a lot of our players so their still getting a feel for the game. But, they promised to bring their A-game in our next game.)

The Rebels will still be training every Saturday, rain or shine, before their next game in order to practice all the play charts and their defense especially. But, the players also started doing a lot more extra training with each other on their free time during the weekdays according to Defensive End, Coy Carriedo. He said “Some of us decided to workout 2-3 times a week with each other while others chose to rest their injuries before our Saturday training.”

Whether it’s running longer distances, lifting heavier weights at the gym, or meeting other teammates to work on conditioning or routes, the motivated Rebels are working on get stronger individually and as a team in time their next game on September 29 against the Cavemen.

Come and support The Rebels as they face the Cavemen this September 29 at 7:00 PM 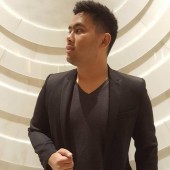 Hi! My name is Pocholo Ricafort. I graduated from San Beda College last 2017 as a Marketing Management major. I'm an optimistic and fun guy who loves watching sports, movies and series. I'm a fan of American Football, Soccer (Football for some), Volleyball, Cycling, and Basketball.